Okay, let’s cut to the chase…

If visiting Greece isn’t at the very top of your Bucket List, you need to completely rethink your life priorities.

Before William and I even moved to Germany in January, we were already talking about where we wanted to go for our 2nd Anniversary in April. Sadly, William was deployed for our 1st Anniversary, so we knew we wanted this to be a special trip.

Even with an overwhelming amount of options, it didn’t take much for us to land on Greece! Of course, there is so much more to Greece than what we were able to fit in to our 5 day trip — but we decided to start with Athens and Santorini (in hopes of returning to more greek islands one day). 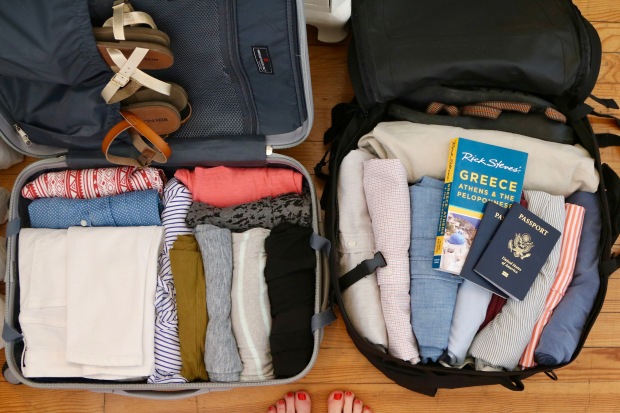 We traveled to Greece in the month of April (4th-10th) and found it to be the perfect time. Of course, it wasn’t warm enough to get in the water, but the weather was lovely (70’s-low 80’s during the day, 60’s at night). April is still considered “off-season” so we found that accommodations/flight prices were cheaper and it was far less crowded… but with May just around the corner, it didn’t feel cold.

We chose to spend 3 full days/nights in Athens. I wouldn’t go as far to say that it was too much time, because the city offers SO much… BUT I do think it could be done in 2/2.5 days.

We arrived at the Athens airport very late and easily grabbed a 50€ cab to take us to our AirBnb, which was in the heart of Athens — directly next to the Acropolis. 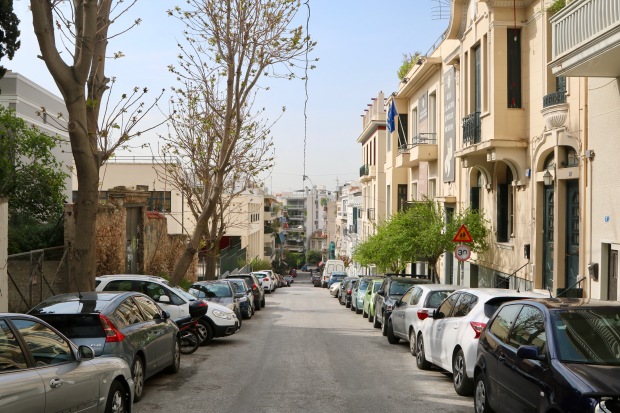 There are many different neighborhoods in Athens and it seems everyone feels strongly about staying in certain ones. We were a tad nervous about our chosen location, thinking it may be “too far” from the main areas people usually stay. This ended up not being the case at all. We loved staying RIGHT next to the Acropolis! Literally, you opened the front door and looked left, and there is was! It was in a very nice area of town (full of locals, a school, great coffee shops and eateries) but also right off a main street that led you to main attractions like the Acropolis, the Acropolis museum, or any of the other neighborhoods (15 minute walk).

All this to say, we would definitely stay there again.

First stop, the Monastiraki Street Market to explore and get groceries! The Monastiraki neighborhood is in the old town of Athens, and hosts a large flea market, many shops, restaurants, as well as, some food vendors. You can’t miss it. 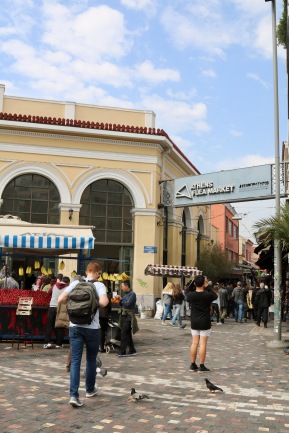 Just a little further north, is the Central Market, which is known for it’s meat and fish market. (But also has all the other foods, breads, nuts, spices, you could imagine.) As someone who doesn’t eat very much meat, it was a little disturbing to be completely surrounded by such a large, diverse selection of dead animals, but still … definitely worth a trip! Ha!

We picked up some of the freshest fruit, olives, vegetables, pita bread, fish, red wine — all for a grand total of $15! If you’re staying somewhere with a kitchen, I definitely recommend picking up some groceries and cooking a meal or two. It was really fun for us to interact with the local vendors (and save money from eating out)!

After shopping, we checked out the Psirri neighborhood and Hadrian’s Library before making our way to Psaras Tavern (in Plaka) for lunch. Psaras offers traditional Greek cuisine — which was good (although, not our favorite meal while there), but really it’s the view and atmosphere that makes this restaurant so enjoyable! We finished the first day with delicious cocktails at the 360° Cocktail Bar (Monastiraki Square), just before heading to a late dinner at Tzitzikas kai Mermigas (near Syntagma Square). 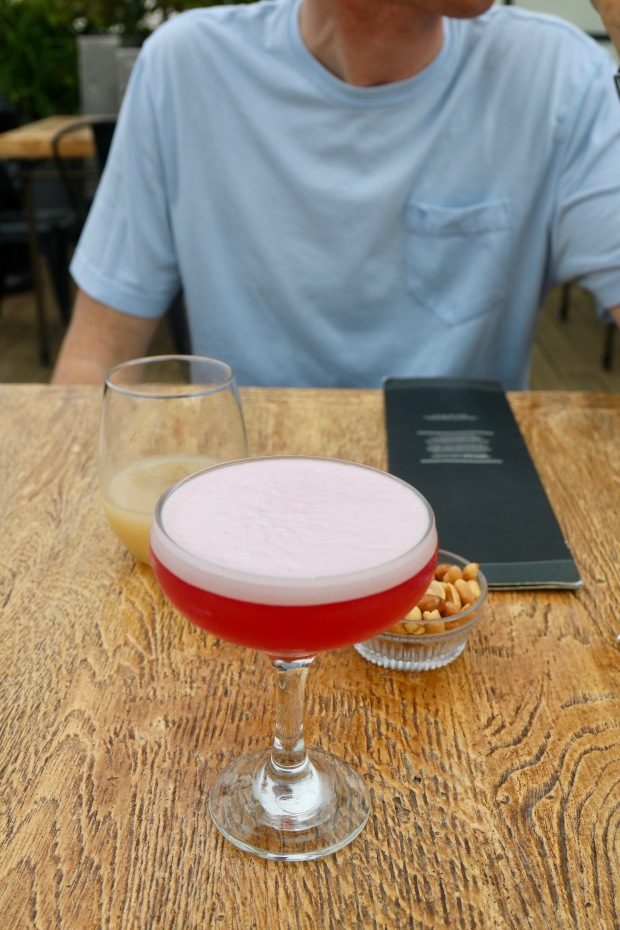 The fact that I don’t have any photos from our meal at Tzitzikas kai Mermigas, proves that there wasn’t any desire to do anything else but enjoy 7 courses of unique pairings and beautiful presentations 😉  (Yes, 7 courses!) We definitely recommend going with their 7 course/fixed menu (20€/person) … everything was delicious!

We hit the ground running on our 2nd day — starting with a 3 hour personal tour of the magnificent Acropolis! We were lucky enough to secure a time slot with a phenomenal tour guide (recommended by Rick Steves himself), Effie Perperi. You can contact her at  <effieperperi@gmail.com> if you are interested in a tour ANYWHERE in Greece.

Fun Fact: Rick Steves actually visited Athens 3 times before he was able to book a tour with Effie // so book early! 🙂 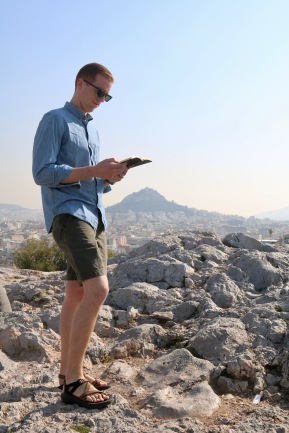 We started by exploring Mars Hill (right next to the Acropolis) — where Apostle Paul ascended to speak to the philosophers of Athens, of the ONE true God, as noted in the Book of Acts in the Bible. It was so special to spend time reading these scriptures on the very “hill” he stood proclaiming the name of Jesus.

Next we entered the Acropolis and learned all about the Temple of Athena Nike, Erechtheum, Theatre of Dionysus and of course, the Parthenon.

Effie was so friendly and knowledgeable. Our time with her was well worth the money — we learned so much more than we ever could have by visiting these sites on our own. 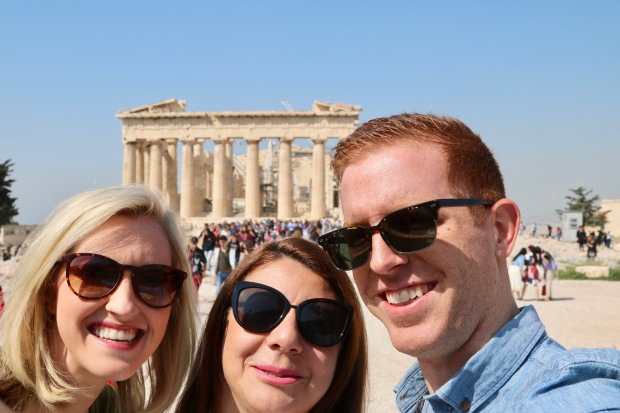 After one last glimpse of the incredible 360° views, we made our way down to the Acropolis Museum. Unfortunately, we only had 45 minutes left of our 3 hour tour — but we were able to make a quick run through the museum with Effie. The museum only costs 5€ and really helps piece together the history and future of the Acropolis/Greek Mythology.

We thanked and hugged Effie goodbye and made the short walk to the Anafiotika neighborhood. There isn’t a ton to see in Anafiotika but we enjoyed strolling through the  quaint streets before making our way to lunch.

We grabbed a delicious lunch at Taverna Saita – one of the freshest greek salads I’ve ever eaten! And topped it off with REAL frozen Greek yogurt, back in the Monastiraki Square. A must! 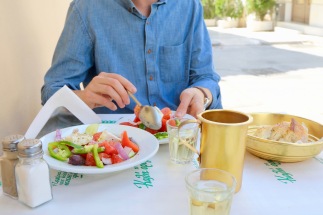 As for the rest of the day, we wandered around new areas, stopping to look at local art/jewelry/antiques, and simply enjoying the perfect weather. We eventually stumbled upon a short hike that went up Filopappou Hill, which offered an entirely different view of the Acropolis. Definitely worth a visit if you’re on that side of town.

For dinner we ate on a sweet, tiny balcony of a restaurant called Ciccus. It offered less traditional (but just as yummy) Greek food, a fun atmosphere inside, or a great spot for sunset (and people) watching if you’re able to snag 1 of the 2 balcony tables 😉

As tired as we were from Day 2, we couldn’t go back without seeing the sun fully set. There’s something really magical about the sunsets in Greece. We loved watching this one from a rooftop bar, A for Athens, off the Monastiraki Square. This bar was our favorite andddd just so happened to have a pretty perfect view….. 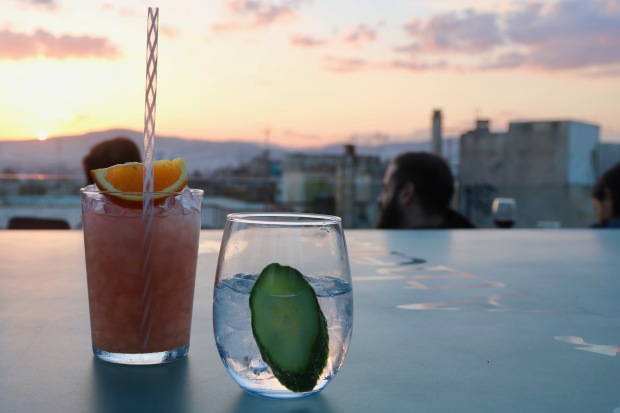 As I mentioned earlier, we feel like Athens can be done in 2/2.5 days. William and I tend to be quick travelers/walkers, so by Day 3 we honestly felt like we would only be seeing more of the same if we stayed in Athens.

After some research and debate, we decided to live a little spontaneously and take the public bus south to the coast! We really had no plans (which was stressful at times) but we ended up exploring the Flisvos Marina in Paleo Faliro which was really nice. 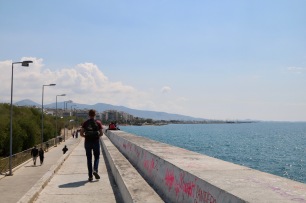 We eventually worked our way even further south to the port city, Pireas. Pireas was a tad more touristy than we had intended but we still managed to have a fresh “sea to table” lunch at Captain John’s. Their menu was a little bit overpriced but the view certainly made up for it. This unexpected trip south ended up being a sweet surprise in what we thought was a very full and scheduled trip.

After a long, hot bus ride back to our AirBnb we were thrilled to spend the rest of the afternoon/evening resting, packing up, and cooking dinner with the yummy groceries we had purchased from the market. (Oh, and trying to save my phone after dropping it in the toilet…)

Athens far exceeded our expectations in every way. We had heard rumors of how dirty it is and how it’s not worth a stop in comparison to the Greek islands, but I disagree. Athens was full of beautiful people, views, food, and just plain FUN!